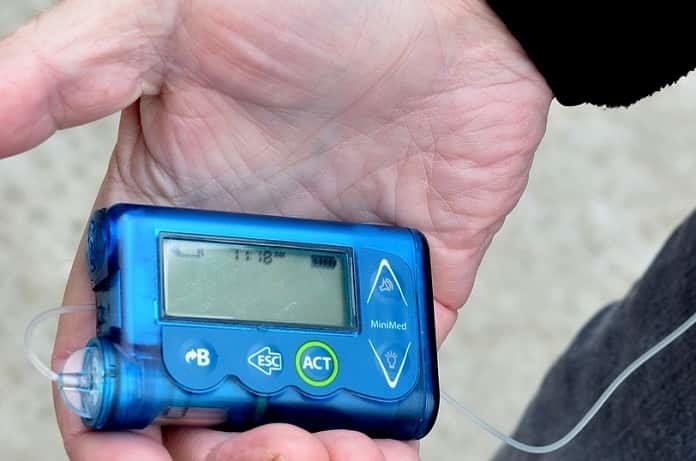 Type I diabetes is a disease that affects more than 300,000 Canadians. It is characterized by a failure of the pancreas to produce insulin, a hormone which regulates the storage and release of sugar into the blood for use by cells to produce energy. If left untreated, Type I diabetes can be fatal, resulting in severe hyperglycemia (an overload of blood sugar) and diabetic ketoacidos is (a buildup of harmful molecules when the body starts burning fatty acids instead of sugar). Luckily, both monitoring and treatment options are readily available for patients today, making outcomes dependent on the management practices of those afflicted with the condition.

Traditionally glucose measurements have been performed by using an external glucose meter to read blood sugar levels from a tiny prick of blood. This gives the patient an idea of their glucose levels at several intervals through the day. More recently, a technology called continuous glucose monitoring (CGM) has allowed patients to track their blood sugar over shorter time points, such as every 5 or 10 minutes. The approach works by embedding a small sensor under the skin which takes the readings and sends them to a device (such as a smartphone) where the patient and clinician can access the data. If glucose levels reach dangerous highs or lows, an alarm sounds in response, letting the patient know what action to take.

On the treatment side, multiple daily injections (MDI) of insulin are a fact of life for most Type I diabetes patients. However, another option is continuous subcutaneous insulin infusion (CSII), also known as insulin pump therapy. This technology can more closely mimic the function of a pancreas, by delivering precise doses of insulin throughout the day in response to small fluctuations, giving the patient more glycemic control. The pump is contained in a cartridge about the size of a cell phone and can be carried in a pocket or attached to a belt.

It is of interest to medical researchers to understand how these different monitoring and treatment options affect glucose level outcomes in patients. Several past studies have looked at comparing MDI with CSII in adults with Type I diabetes not using CGM, as well as the benefit of CGM initiation in current CSII users. However, the present study is the first to investigate the outcomes of using an insulin pump (vs injections) in patients currently using CGM.

The work was conducted as a collaboration between multiple centers across the United States and published in the Lancet Diabetes and Endocrinology this July. For their sample population, the researchers drew from a pool of participants in a clinical trial of CGM for adult Type I diabetes patients using multiple daily injections (MDI). They randomly assigned half of these participants to continue using MDI, and the other half were switched to a group using insulin pumps (CSII). Both groups were provided with the necessary technology and training to use their devices, and follow visits were conducted after 6 weeks, 14 weeks and 28 weeks, when data was collected. The primary outcome that researchers used for comparison were the change in CGM-measured time of a patient’s blood glucose in the range of 70-180 mg/dL from baseline. In other words, how did the use of either treatment technology help stabilize glucose levels over the treatment period?

The results showed that average time in that blood sugar range increased by 78 minutes per day for the insulin pump group vs. a 17-minute decrease for the injection group as compared to their baseline readings. Similar results were obtained for all follow-up visits. This suggested that switching to an insulin pump did, in fact, improve glycemic control. This improved control was also shown in measurements of average glucose concentration and lower incidence of hyperglycemia. However, the insulin pump group demonstrated an increase in cases of hypoglycemia as compared to the injection group. The authors speculated that this could have been due to over-administration of insulin in some cases by improper use of the pump and reflected the tighter control afforded to patients with this instrument.

All clinical trials are limited by the need to interpret the results based on the characteristics of the sample population. Since this study focused on adults with Type I diabetes who had already been using CGM, the results cannot be universally extrapolated to all persons with diabetes, those under 18 years of age, and those initiating monitoring and treatments approaches at the same time.

In summary, the research showed that glycemic control is increased by switching from injections to an insulin pump in adults with Type I diabetes using CGM. Patients initiating this switch could benefit from this control, with the knowledge that proper training and use is paramount to avoid adverse events such as hypoglycemia.